There’s something about anime that is very appealing to millions of people in the world. The art style, the violence, the emotional dialogue, or just the ridiculous plotlines are some of the things that fans of the genre have come to love.

But, what made this anime truly blossom into a must-see series? Learn more about the show and how it became a popular anime all over the world next.

The Plot of Speed Grapher

Speed Grapher follows wartime photographer Tatsumi Saiga as he returns to Japan. He is there to attempt to capture the most compelling and most dangerous situations to bring down the powerful.

While doing so, he comes across a mysterious fetish club known as Roppongi Club where the rich and powerful gather. At the center of it all is a young girl named Kagura.

Kagura is exploited for her unique ability to give others special powers based on their fetish and desires through her bodily fluids. The group has taken the young girl hostage to control her abilities.

They force her to give every member of the club their special powers. Saiga begins his plan to extract Kagura from the club only to be hunted down by its leader Suitengu.

However, Saiga was bestowed with the ability to destroy anything that he photographs.

Saiga and Kagura spend most of the series on the run from Suitengu until the government begins to interfere. Suitengu begins to develop ill-feelings for the leaders that wanted to take control of the club as well as Kagura.

He then proceeds to assassinate all members of the government inside the club. Meanwhile, Saiga and Kagura have vowed to end all of this misery by fighting back only to have Kagura captured.

Saiga attempts to rescue Kagura but is nearly defeated by Suitengu however, leaders from all over the world have launched missiles to Tokyo to eliminate Suitengu.

In the end, Suitengu ends up killing all the members of the club and spares the life of Saiga and Kagura.

The Many Allegories of Speed Grapher

While the anime series prides itself on fast-paced action and beautiful imagery, the series has many allegories especially with the use of power.

Saiga’s power remains one of the most fascinating powers within the realm of anime. It speaks true to his goal of bringing down the powerful who have taken control of the country.

Even before he was granted the ability, he already had the power to destroy an individual or a group by capturing photographs of people at their weakest. The show simply magnified such a theme by bestowing Saiga with the power to destroy someone through the lens of his camera.

Another great topic for discussion is the show’s unique way of tackling the uglier side of human desire. In the earlier episodes, Saiga infiltrates the club only to find different people trying to force their way to Kagura.

They want her to grant them their most inner desire and manifest them into the real world. The depiction of vile desires provides an accurate insight into what humans can be when they are consumed with greed, power, lust, and corruption.

Speed Grapher is a show aimed at a mature audience that wants a layered narrative filled with intellectual levels. The show has taken inspiration from the struggles of the Japanese economy and how it has affected people in so many ways.

The director has even described Saiga as the person who feels compelled to oppose the system while Kagura is the depiction of people who are helpless and abused by the system.

Anime comes in many forms and Speed Grapher leans toward the racier side. The series was well-received by many fans of the genre. Critics have voiced their concern about the adult theme as well as its complicated storyline.

The complex world within Speed Grapher is the true star of the show. Much like in the real world, Speed Grapher provides a peek of how power can be a gift for some and a curse for the rest when it is in the hands of the greedy and corrupt. 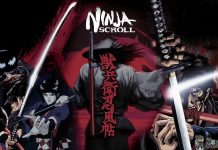 The Storyline of Ninja Scroll