A fresh leak based on the movie’s tie-in LEGO sets, claims that we’ll be observing 3 versions of the Iron Man Suits.

Avengers: Endgame is just three months away from its official release and soon after Walt Disney will have to start rolling out their product offerings/merchandise for the fans of the movie. As of right now, we have witnessed some of the action figures being released in foreign countries but now, a new LEGO hint leaks that we’ll be able to see a lot of different Iron Man figures.

According to a popular Instagram user, @1414falconfan, who is privy to early LEGO releases, has leaked that at least one Endgame LEGO set will contain three different versions of Iron Man suits that Tony Stark has created. 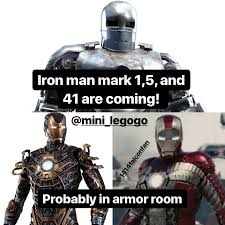 Although this Instagram user cannot post any pictures of the figurines themselves,  one recent Instagram post revealed that the figurine set will include three of the Iron Man suits, viz., the Mark 1, the Mark 5 and the Mark 41 armors.

Mark 1 is the first ever Iron Man suit that Tony Stark ever created, at the beginning of the movie Iron Man. Mark 5 is the one which Tony Stark used for the first time ever in Iron Man 2. It was the stand-out racetrack battle that grew from a suitcase-sized case. Mark 41, though, is all those armors Tony Stark created post-battle, New York. Amongst all of these amazing armors, the most beautiful one that stands out among the rest, the black and golden one, made its appearance for the first time in Iron Man 3 at the time of Stark’s battle against Aldrich Killian (Guy Pearce).

Coming to the news about the minifigs again, it should be noted that the Instagram post revealing this information does not reveal much else. It does not say anything about the fact that these figurines will appear in some sort of time traveling set where Tony Stark is seen to be traveling time while wearing these suits.

What is your favorite Tony Stark Suits in MCU? Do you have a hobby of collecting LEGO minifigs? Was this post helpful? Let us know in the comment section below.

Avengers: Endgame will appear in theatres on April 26th. Other upcoming releases by Marvel this year are Captain Marvel on March 8th, Spiderman: Far From Home on July 5th.