Angry at the merchants who had fired at Annabal, the servants of Oldholt picked up arms, anything they found nearby that could deliver serious wounds, and marched against the merchants. They threw them out of the main entrance of Oldholt with the threat that if they ever show their faces near this place, they would be hanged. Terrified for their lives, the merchants ran and never looked back. The trouble-makers were gone but the major problem still remained, Annabal lay unconscious in her bed. To heal her, the head priest of the church was called. The priest was a very old man, aged at 75. He shuffled into the room, bent-backed, his frame supported by a brown cane, bald-headed with a long white beard. He touched Annabal’s head with a quivering palm and declared that a demon infested her body and if not immediately removed, it might be the death of her.

Soon after, all preparations were made to conduct a ceremony to expel the demon out of her body. She lay on a makeshift bed in the center of a pentagram that the priest’s apprentices had made on the floor of the church. Candles were lit all around the bed. The people were advised to stay back and the priest commenced his incantations. He read from a small book. His voice quivered and he spoke in an unknown language. As the intensity of his recital increased, the air in the church also grew heavy. The people that remained in the church out of concern for Annabal felt the atmosphere grow hot, very hot. In the middle of his prayers, the priest stopped to take a breath and ordered the people to get out of the church or else they can be very dangerously harmed. They went out and saw a tornado forming above the church. It was a dark grey color and was increasing in size by the second. Inside the church, Annabal’s whole body shook violently. Her breathing grew ragged and as she gasped for air, a very dark black smoke escaped her mouth. The priest motioned his apprentices to hand him the object. He shouted his final words in the foreign language, at the demon and pointed that particular object at the dark semi-solid figure. Outside, the people, terrified of the events rushed to their huts. But one animal, a small one kind of like a dog but not exactly because it had two small horns, wandered inside the church whose door had flown open because of the tornado. The animal sniffed his way inside and reached the corner of Annabal’s bed. The time at which the animal entered the pentagram coincided with the trapping of the demon in the object that the priest held. Annabal started shrieking because the demon hurt her while leaving her, the priest screamed in determination to trap the demon and another, a very hollow shriek came that must have belonged to the demon.

The next morning, Annabal woke up in her chambers, all healthy and happy. The people told her what had happened, in excruciating detail. She was shocked to hear such baffling stories and refused to accept any of it. Soon she got over her dilemma and apologized to everyone for all the trouble they took for her. Everything was peaceful again, except for one. 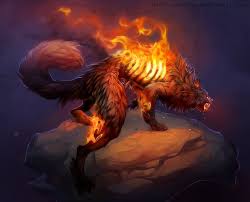 In some corner of a garden, the strange animal lay in the ground, shivering and crying. Its body changed in color and increased in size. It grew big claws, a big mouth with huge, pointed teeth. Its whimpering turned into a huge roar. The people nearby came out of their huts to see what happened, just when a creature emerged from the bushes. It was a humongous creature with its spine bent, translucent skin showing muscles underneath, spikes that grew out of his back all the way to the tail, red eyes, and a gaping mouth. Its body was so heavy that every step it took, it endangered the earth to split into two. By this time all the population was collected in a big circle around the creature, including Annabal. Somebody ordered someone to call the priest but the old man had already died this morning. His most senior apprentice approached Annabal in the midst of all the commotion and told her the priest las few words. It was that the demon couldn’t be trapped wholly, a part of it had escaped the imprisonment and the priest didn’t know where it went. He advised everyone to stay alert and also had sent the object in which the demon was, to be taken care of by Annabal. 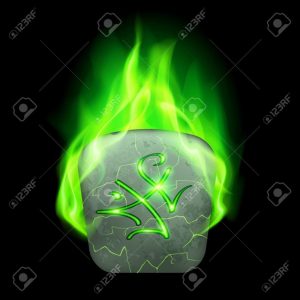 As she looked down at what she had been handed, she noticed a shiny little square-shaped stone, emanating a green sheen and there was engraving on it. Before she could inquire against the engraving the apprentice was lost in the crowd. A loud roar came from behind her and she spun to see the creature standing tall in front of all the villagers. It exhaled a little and a short burst of flame came out of its mouth. It itself seemed surprised at its new power. Soon the people started to run away from him. A stampede broke out and many were trampled under. Among all this confusion, Annabal’s most trusted servants of Oldholt, prepared a wagon for her to escape in. They grabbed her by her arm and pulled her into the wagon and began to escape the scene. Annabal whirled in her seat to see that the creature was destroying everything in sight with his fiery breath. It trampled the people, it burned the buildings and it destroyed Oldholt with a blow from its tail. Seeing her place and her dreams being demolished in front of her eyes, Annabal cried as the wagon drew away.

The writer of the story “An Adventurous Story: Treasure Hunter For Hire, Chapter X” is Gitanjali Mishra. Connect with her on Facebook.