An Adventurous Story: Treasure Hunter For Hire, Chapter I

Treasure Hunter For Hire: Chapter I

“Prince Joce is dead? What are you saying? Are you listening to yourself? Don’t go telling such lies or you’ll find yourself face to face with the royal executioner.”, Lane Langley said.

“No! No! I’m telling you. I just talked to the guard at the palace and he told me that Prince Joce was found dead in his room last night, stabbed through the heart, no one wants to believe it to be true but alas, it is.”, exclaimed Reymond Fetcher.

Lane and Reymond were sitting in a tavern with four other friends. Everyone was baffled to hear this tragic news. No one wanted to believe what Reymond was saying. Prince Joce was a great warrior, he treated everyone in his kingdom equally, he was very kind and generous, and he was the successor of the throne of Esterdell. Prince Joce had a twin brother, Prince Orvil, who loved Joce very much. Their bond was unbreakable, and they were inseparable. But Orvil was weaker than Joce in physical strength and because of Joce’s kind nature, people of the kingdom clearly favoured Joce for the throne. The late king, Alder, also named Joce as his successor before he died due to cardiac arrest.

“You accomplished the job very well, Moldark, I’m proud of you. Here, take your money.”, Orvil said, throwing a bag so heavy with coins, that the brute of a man standing in front of him and eyeing the bag of gold with hungry eyes, almost stumbled to the ground in order to catch them.

“Thank you, m’lord! Beg your pardon m’lord, but may I ask why did you order me to kill your twin brother?”, asked Moldark.

“Be thankful that stupidity isn’t measured by size or else you would have been smaller than an ant. Of course, I ordered you to kill Joce because I am the rightful owner of the throne. He was a fake. Always making donations to the poor, always listening to their stupid, tiny problems, his smile made my blood boil. But not anymore because I am king now.”

As soon as Moldark opened his mouth to say anything anymore, there was a little knock on the door.

“Good morning Father, it’s me. Mother sent me to inform you that the council meeting is in 5 minutes and you have to be there, don’t be late.”, Orvil’s daughter Elaine said.

“Okay love, I’ll be right there.”, saying this, Orvil dismissed Moldark with the orders to vanish from the palace and went to the meeting.

Elaine was a 20-year-old princess with beautiful blonde hair, tall height and a beautiful face with mesmerizing blue eyes. She had an adventurous nature and curiosity for life. In order to explore new places and things, she always got herself in some kind of trouble. She loved travelling in search of exotic books and libraries. She was very fond of reading the history of her kingdom and of places outside of it. When she first met Desmond, it was by pure chance and also it was love at first sight.

Desmond was a 22-year-old, renowned, bounty hunter. A bounty hunter is a person who catches fugitives for money(bounty). When King Alder’s rule had just begun there were many fugitives because of the unrest in the kingdom, but as time flew by, the number of fugitives decreased and peace settled in on Esterdell. So, Desmond decided to be a bounty hunter of a different kind, a treasure-seeking one, called a treasure hunter. He would hear rumours and then he would go from place to place to confirm them. If the rumours about the treasure turned out to be real, he would go out on a full-blown treasure-seeking mission with his team of trusted men. So, now you can see why Desmond and Elaine were so perfect for each other. They both had a knack for exploring new places and going out on adventures.

One fine morning, before the death of King Alder, Elaine, as she was walking through a corridor, saw her most trusted handmaid, Fatima coming towards her, in a kind of hurry. She got really excited because it seemed like Fatima had some secret to convey.

“Oh do tell! Do tell!”, exclaimed Elaine with gleaming eyes.

“Well, I heard that there is this small mesa on the outskirts of South Esterdell on top of which there is a cherry blossom tree that has bloomed early this year. People say that it’s the only cherry blossom in the whole kingdom and it is really beautiful.”

“Oh, Fatima! You just made my day. Tell the coachman to get the coach ready and you pack my necessities, you are coming with me.”

Whipping out her map she asked then, “Where did you tell this mesa is?”

“The lone mesa in the forests of Orden.”

“Then so be it. We are going to see the cherry blossom.”

And so, Elaine’s caravan set out for the one and only cherry blossom tree. The path to Orden city was not very eventful. They travelled for about three days before reaching the beautiful city where, when the folks heard that the princess was arriving, they beforehand set up their place to stay and other necessary arrangements. But Elaine was not tired, she will not rest until she saw the infamous tree. So, she set out in its search asking the vendors and folks around which lead her to a lone mesa, not in a forest but surrounded by dying grass. She came to know later that the forest had died a long time ago due to the excessive heat that the southern region of Esterdell faces and the grass and wild plants were left in its wake. She ordered her servants to bring her equipment. She was going to climb the mesa, alone. Her servants and Fatima requested to join the hiking, for her safety but she turned them down.

She started her hike, the sun was beating hard on the plain, rocky surface of the ground. She started sweating and soon her breathing became ragged even though the mesa did not have much slope.

Stumbling and fumbling, she reached the top and the sight that met her eyes was not like anything she had ever seen before.

The tree was magnificent with beautiful pink flower petals floating in the wind as it blew across the flat surface. Elaine’s eyes blinked once to store a picture of the scenery in her mind. When she’ll go back, she’ll tell Master Zane to paint a picture for her. She walked towards the tree and saw a figure sitting in the grass that surrounded the tree’s big trunk. It was a man, sleeping under the shade, with a sword by his right shoulder. As Elaine reached close to him, he opened his eyes and saw her, head cocked to the side, staring at him with the curiosity of a child. She noticed that he had intelligent green eyes and a mop of white hair. 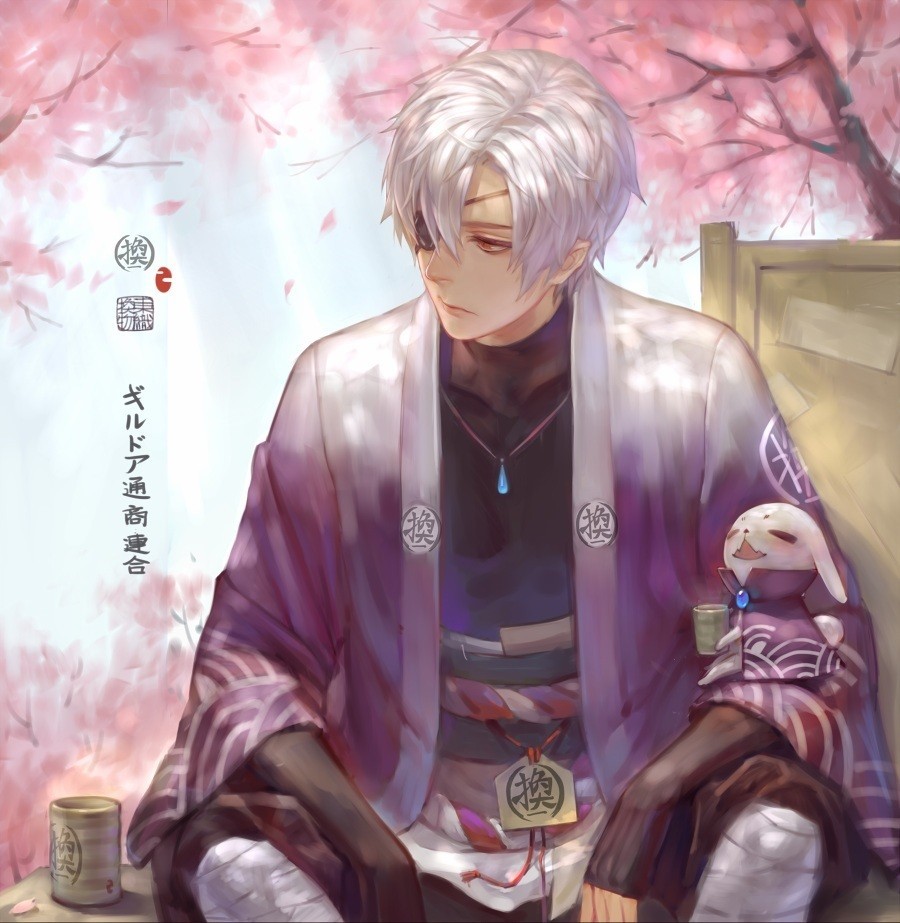 “Who are you? Are you here to visit the tree too?”, inquired Elaine.

“I’m a bounty hunter in search for treasure. I was just resting here for a bit.”, saying this the man stood up. He was a little taller than Elaine.

“What is your name?”

Their eyes met and he said, “My name is Desmond.”

The next chapter of “Treasure Hunter For Hire” will follow soon.

The writer of the story “An Adventurous Story: Treasure Hunter For Hire, Chapter I” is Gitanjali Mishra. Connect with her on Facebook.