“I think we should not see each other anymore.”

Desmond was speechless. He could not believe Elaine was saying this. Only yesterday she had been so determined to go against her father’s plans.

“But Elaine, I love you. I cannot imagine my life without you —”

“Desmond, listen and listen carefully. You will not contact me anymore from now and you will accept my father’s proposal, that treasure hunt.”

“No questions, Desmond. This is my choice. Do not feel, that anyone or anything has forced me to make my decision.”

All this while Elaine had her back to Desmond. He pulled at her shoulder and turned her towards him to see that she had tears in her eyes.

He couldn’t say even a single word for a long time. They just stood there watching each other. After a while, Desmond said, “Okay. I’ll accept the king’s proposal if that is your wish.”

She turned her back towards him again and said sternly, “You may go now. You have a mission to embark upon.”

And wordlessly Desmond withdrew. After a little while, Fatima came to Silveroak to find a devastated Elaine, sitting under a tree, crying relentlessly. 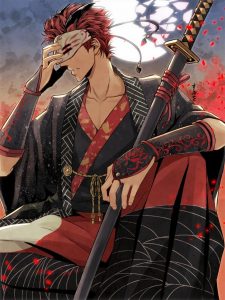 “Load that trunk in the second wagon, not the third, you idiot.”

Collin, the right-hand man of Desmond, was barking orders right and left. It was the day on which they were supposed to leave for the treasure hunt and everything was delayed because Desmond didn’t want to go. They had procured the map leading to the treasure from Orvil when Desmond met him, the day after he had the conversation with Elaine, to accept his proposal. Along with the treasure map, Desmond also received 20 men/mercenaries as promised. The map pointed that the treasure was on the continent of Igoth, in the city, Cragstorm. Desmond wondered why the city was called Cragstorm, and what kind of dangers will they face before reaching. Among other things that went through his mind, one was constant, the thought of Elaine. He couldn’t believe he was actually going through with the hunt, on top of which he couldn’t believe that Elaine had told him to do so.

“Stop sulking over it and help me loading the wagons. We are already delayed by two hours.”, a stern voice of Collin called.

Desmond was sitting. He looked up at his friend whose face was against the sunlight. Desmond was the only one in the whole kingdom to have white hair. It was very unusual and because of which he didn’t make many friends. Everyone considered him a freak, except for Collin. He was the one person who saw Desmond as a fellow friend and not a kind of monster like other people in their village. They met at a very small age of 13 and have been fast friends ever since. Collin was as tall as Desmond but more muscular with brown hair and brown eyes.

“Can’t help it, my friend. Can’t stop thinking about her.”, said Desmond.

“I know. I know. But look at it this way, this is the biggest treasure hunt of our lives. We would be exploring new lands and if we truly get our hands on that treasure, we would be filthy rich.”

This brought a faint smile to Desmond’s face. He stood up and then went on to help with the preparations.

Traveling was not so taxing in the start. They faced rain and heat but nothing much more. They traveled in the day and set up camp in the night. There were a total number of 7 wagons and 28 men in the whole team out of which 20 were the men given by Orvil and the remaining 8 were from Desmond’s original team. Desmond had told his crew to beware of Orvil’s men, they might not be so loyal and can be willing to betray them at any given moment. At least two kept watching every night for animals, robbers, and other trouble. A week went by like this. There was no mingling among the whole group. Everyone seemed detached and separate groups were automatically created. The mercenaries remained among themselves and Desmond’s team among themselves. But then one incident changed it all.

One fine day, they were crossing the lake, Wyvernlake, via Newbridge. As its name suggests it was fairly new so there was no need for caution. Desmond was in the 1st wagon and Collin was in the last one. Suddenly they heard distant rumbling which they thought might be thunder. But as the rumbling grew Desmond realized it was coming from beneath the bridge and not above. To know what was happening, Desmond went to the back of his wagon and looked out. To his shock, a humongous ripple of a wave was coming towards them. By this time everyone knew what was going on and orders were being passed down from one wagon to the next, to move fast and cross the bridge before the wave hit them. Before they could do anything about it, what they saw terrorized them to their cores. 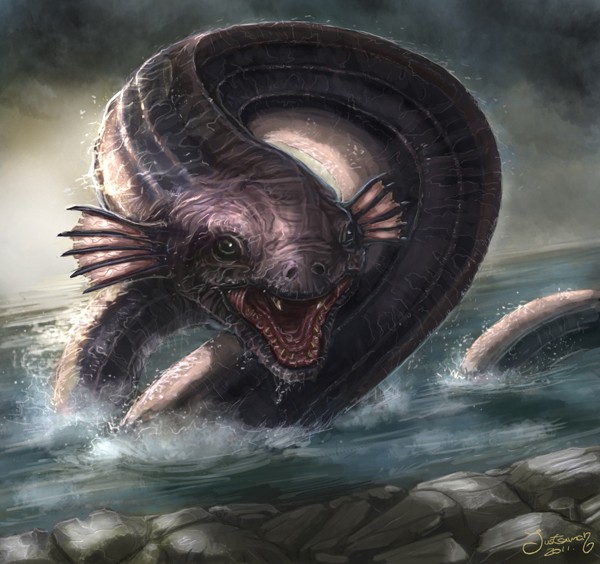 A huge reptile-like creature had emerged from the lake, that had a small set of fins at the side of his face, two beady eyes, and snake-like two fangs. It was nothing like any one of them had ever seen. Before they could comprehend the image in front of their eyes, the monster spoke in a deep resonant voice. It said, “STOP!”.

The writer of the story “An Adventurous Story: Treasure Hunter For Hire, Chapter IV” is Gitanjali Mishra. Connect with her on Facebook.