This is pure Kingdom, this fight right now is one of the best fights we’ve seen, even if it’s not over it can only get better. The emotional charge and the clashing ideologies are awesome, and even if we take it for granted, the art is amazing, the battle panels are full of life. Subscribe to our Reddit community for more Kingdom Chapter 626 updates.

Ri Boku’s decision, Will he retreat?

Ri Boku still believes Hou Ken has a chance of winning. If Hou Ken wins, and the HSU’s flanking attack is turned around, his chances for victory will be better. Remember, to the characters in the story Shin isn’t the main character. He’s just some kid coming up through the military ranks. There’s no reason for Hou Ken’s defeat. He defeated so many other great names and shouldn’t fall to this young upstart. 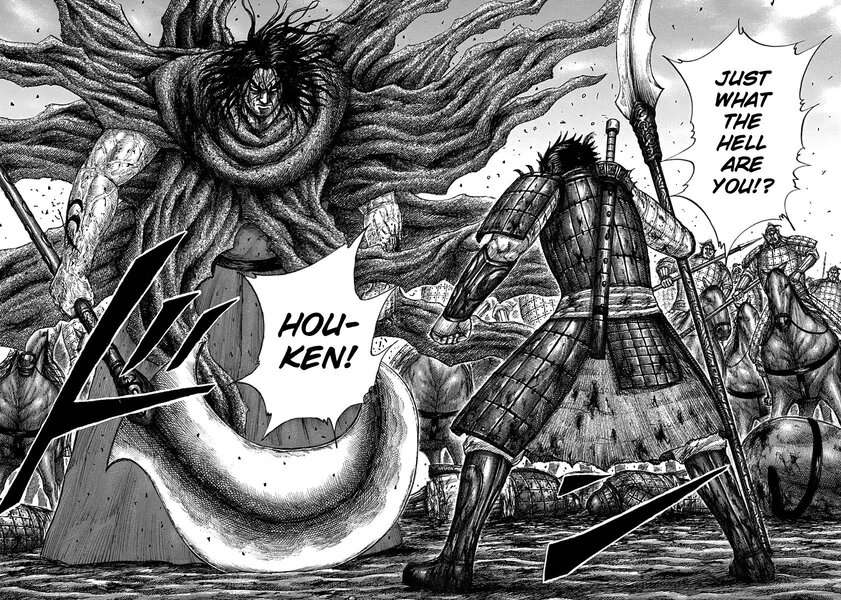 As far as Ri Boku is concerned, the outcome of the battle will not be decided until this duel is concluded. Thus he will not know whether the correct decision is to retreat or counterattack until Shin and Hou Ken’s fight ends. Perhaps he will make a call in Kingdom Chapter 626 and will retreat. If this battle continues too long there will be no last-minute comeback.

The thing about Hou Ken is he’s this absurdly strong individual and no one knows where he came from, or why. Even the way he pops up on the battlefield is always super mysterious, like a ghost or spirit. We knew he’s a Bushin, but what is that? Leaving us in the dark about his origin was fully intentional. That’s another reason he’s finally going to die in the next couple of chapters. As for start, we might see Shin overpowering him in Kingdom Chapter 626.

Chapter 626 of the manga is going to officially release on 19th December.