Chapter 122 is masterly crafted- reliving Ymir’s slavery days with Ymir’s visually obscured feelings symbolizing the ambiguity of Ymir’s authentic deepest wishes. How the author preserves a sense of mystery while unveiling Ymir’s back story. A story is so horrific that we the readers and Ymir herself have a hard time processing and understand the past. Subscribe to our Reddit community for more newest updates on the Shingeki no Kyojin Chapter 123.

SnK Chapter 123 is going to release in the following month’s Bessatsu Shounen Magazine, on 9 November 2019.

Ymir was enslaved at a young age, tongue cut off, unable to speak. Even with the titan powers, she could not escape her slave mentality. She existed that way for 2000 years, until the titan seeking freedom finally set her free, to make her own choice. Ymir’s slave mentality forces her into a slave from which she never recovered, even after being such a powerful figure and growing up and having children.

It’s beautiful and poetic, something more fitting to your typical stories. But destiny and freedom can’t coexist, which is all the more ironic considering Eren’s talk about freedom. Ymir was waiting all these 2000 years for a savior to come free her.

Even when Ymir has gifted the greatest power in the world. She has already broken down and had been stripped of her dignity. She still lives on as a slave for survival. Ymir doesn’t develop as a human, she develops as the greatest military tool.

There is no difference between an Eldian or Marleyan. Even the Marleyans can become titans, just like Eldians, but the reason they don’t is that Ymir in the paths dimension doesn’t make them into Titans. She is a literal slave to the Eldian king, and making the enemy into titans would be bad for Eldia. Ymir is more or less an actual god with all the powers, but the slave mentality chains Ymir. 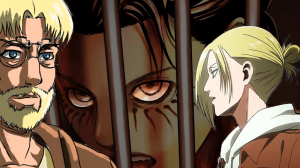 Shingeki no Kyojin Chapter 123 will most likely switch to Levi and Hange or Historia. There is no way the author is going to show us what happens a month after this. It’s the rumbling, there is no way he will be merciful like that.

The Role of Zeke in The Attack on Titan Chapter 123

Zeke will probably transform again in Shingeki no Kyojin Chapter 123 and attack Eren. He will try to get back to the Paths to stop Ymir. This is probably where Levi reappears to fulfill his promise to Erwin.