Chapter 970 came out earlier and this is one of the cleanest chapters of Wano on terms of artwork. The fight had a great sense of progress to it and the panels didn’t look too loaded with information. The expression of Oden and the retainers were on the point and that makes this chapter wholesome. Oda’s artwork and panel structuring were shown beautifully in this chapter.

When is the release date of One Piece Chapter 971?

The fans are anxiously waiting to read One Piece 971, but unfortunately, the upcoming chapter is on a week’s break. As stated in the previous chapter, Oda is taking a week break… which means Chapter 971 is going to release officially on 16th February 2020.

Chapter 970 showed how Oden lost against the beast captain, the author is hurrying in finishing this flashback, if not, he would have shown us the whole battle. We know merely one more chapter is left for Oden’s story and there are too many things to cover. So, Oda will proceed without extra details to cover the story. The important thing will take priority in One Piece 971, like Oden’s execution, fire on Oden Castle, the role of Toki in sending the retainers to the future.

The flashback is about to end, we are not sure whether it will take 1 or 2 chapters to conclude the Kozuki Oden’s story. Possibly, One Piece Chapter 971  will mark the end of the flashback. It is going to show us how he gets executed and how the retainers will get teleported to the future.

In addition to that, the devil fruit abilities of Toki will be explored in this chapter. As we know, the scabbard got sent to the future by her. There are so many mysteries revolving around her including why she didn’t teleport herself along with the scabbards and how her abilities work. So, be ready to get some shocking reveals in One Piece manga 971.

Chapter 971 will show the Hour of Legends

We know that people of Wano remember the event very fondly and created the legend of the Nine Red Scabbards of Oden. Looking at the cold reaction of Wano people in the previous chapter after learning the failed attack and imprisonment of Retainers and Oden tells you that the town’s talk was negative towards the Oden and co. This indicates that this chapter wasn’t the ‘Hour of Legends’ and that this event will likely occur in One Piece Chapter 971. 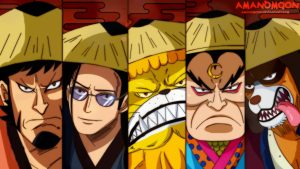 Who was stronger Kozuki Oden or 100 Beast Kaido?

Kozuki Oden was shown unbelievably strong in the last chapter, we would have loved to read this whole fight. Some fans don’t believe this but, Oden and Kaido both were even in terms of strength. We can say, Kaido being slightly stronger than Oden while the other being a little faster than the first. If Kurozumi Higurashi didn’t intervene in this battle, the outcome might be a little different. Yea, fans are furious over her for making Oden’s life miserable and stole the last chance that our hero had against Kaido. Most definitely, we are going to see her dying in One Piece Chapter 971. The end of Oden’s flashback can’t end without her death as she was the most responsible person for every bad thing that happened so far in this flashback.

Who is the traitor?

Fans all around the world are making theories and predictions on who is traitor? Is anyone from red scabbards? Well, we don’t think so. It is highly unlikely for the red scabbards to betray Oden. The fact that all of them went against Kaido and his army to protect Wano is more than enough proof. The thing is we sometimes look for more complex answers while the answer is right in front of us. They could die for Oden if needed, do you still think that one of the retainers is traitor? Let us know in the comment section.

As we know, the One Piece manga is on a week break. Chapter 971 will arrive online on 16th February 2020. However, the raw scans of the chapter will leak 2-3 days before the official release. This means you will be able to read One Piece 971 Raw Scans on 13th February 2020. The leaks will be updated here once release online. So, make sure to check this post out again, you can also join our Reddit Community to get awesome news daily.

A live discussion forum for One Piece Chapter 971 is available here, you can discuss the spoilers to your heart’s content. If you have any speculation you can comment below or just post in this forum. Thanks!