Hello viewers! today I’ll be writing an article about BTS love yourself: answer, the love yourself era began on September 18, 2017, came to an end on August 24 when Love yourself: Answer was released. Release dates we confirmed by big hit entertainment on July 16, 2018.BTS will not promote Answer’s music on South Korean weekly music shows but instead, unveil the new songs at the Seoul stops of the. The septet will then head to North America for over a dozen sold-out shows in the U.S. and Canada.

Love yourself: Answer is about realizing to love yourself first and to accept all our flaws as shown in the Intro: Epiphany by Kim Seokjin of BTS.BTS released a version of their song “Idol” with a rap verse from Minaj, the share of their latest compilation release Love Yourself: Answer.

Minaj wrote on Twitter, “Uh!!! What’s good Korea?!”, including a link to the song, which is simply open digitally. The song Idol’s teaser was released on August 22, 2018, revealing a completely new concept. The song Idol’s music video was released on August 24 2018. Idol had a little bit of Bollywood vibe which was noticed by many viewers. The song Idol is about “loving myself”, and the avoiding all the negative things in life. The Love yourself: Answer tracklist came out on August 19 and also this final series of Love yourself: answer follows the previous ones-Love yourself: her, Love yourself: tear, which went to No.1 on the Billboard 200 in May. Answer featured both new music and already released songs, some of which were featured on Her and Tear. Six original — “Trivia: Just Dance,” “Trivia: Love,” “Trivia : Seesaw,” “I’m Fine,” “Idol” also “Answer: Love Myself” — were highlighted on the album along with the precise release of several earlier revealed songs, including solos from the septet’s vocalists, just one of which has earlier been released in full, & alternate versions of singles “DNA,” “Fake Love” also & “Mic Drop).”

The answer was first proclaimed on 16th July 2018, with the release of the album including seven new tracks arriving the latter day. The album was intended as the denouement of the Love Yourself series, which correlated the story plot of the short film Love Yourself Wonder, EP Love Yourself ‘Her’, and studio album Love Yourself ‘Tear’, making the Kishōtenketsu storytelling structure.

The writer of the article “BTS Love Yourself: Answer” is Sakshi Salian. Connect with her on Instagram. 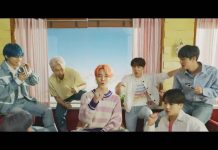