It was not so much a village as a couple of huts together in the wilderness. They stopped their wagons a little farther away from them and decided that it would be better if the mercenaries went first and check if there was any trouble around. A little while later the mercenaries came back and confirmed that there was no trouble and that there were harmless old couples living in the huts. So, Desmond’s team went towards the village. The mercenaries had already told the villagers that a big team of treasure hunters was arriving, so the villagers already started preparing food and greeted them with much enthusiasm. According to them they rarely get any visitors or guests and Desmond’s team have been their first in ages. There were 6-7 huts, placed in a rough semi-circle. At the center of the semi-circle was the remains of a bonfire. The huts in themselves were not too shabby although Desmond was compelled to think why these people were out here in this place and not in the nearby city itself? Putting his doubts aside, he concentrated his attention on meeting with all the villagers. The leader of the group was an old man named, Aurel Coombs. Desmond guessed his age to be approximately 75 years and above. He was very tall, had white long hair, a white beard and carried a staff around, which helped him to walk around. He shuffled forward from between the group of villagers and Desmond knew instantly that he was the leader. He had an air of authority around him. Aurel was shocked to see such a white, shiny mop of hair on such a young lad. He also noticed the muscular man behind the white-haired boy, standing really close to him, being protective. Both the lads seemed very young and had swords at their backs. He knew that treasure hunters carry guns or crossbows or something like that but he had never seen hunters with swords before.

He asked, “Welcome to our small village. My name is Aurel Coombs. I am the leader here. And you are?”

“My name is Desmond, and I am the leader of my team. This is Collin, my best friend and we have embarked on a mission, to find a treasure.” At this, the villagers stared at him with sparkly eyes.

“Have you been in a fight recently? I can see some wounds on you and your friend.”

“Well, we have been in a fight with a kind of monster. A water monster, to be precise. Although we defeated it, we ourselves did not leave unscathed.”

All the villagers grew silent at this. Their heads drooped in sadness. Aurel, at the mention of the monster, looked away, unable to meet eyes.

After he mustered some courage, he said, “That monster’s name was Neshix. You must be wondering why our village is so small that even the word ‘village’ does not even fit it. Well, our village used to be a big city which went by the name Poshya.”

“Oh yes. I have heard rumors about this city. It is said to be buried deep inside some ocean or a water-body.”

“There is no ocean or water-body, the monster….the monster also was not alone back then, he was part of a huge clan. The clan destroyed us, child. One fine day, all the monsters attacked Poshya. They destroyed everything in sight. Only we were able to escape somehow. We ran and ran and when we thought they couldn’t reach us here, we made settlements. You don’t know how relieved we are to hear that the monster is no more. We have spent all of our lives afraid of that monstrosity. Thank you, child. You have proven to be a true boon for us.”

Saying this, he grabbed both of Desmond’s hands and shook them violently before pulling him in a tight embrace. Next, he did the same to Collin, although he cried out of pain as he had been struck at the torso by Neshix. Aurel stepped back with an apology and suddenly all the villagers grabbed and shook Desmond and his team for their victory. Aurel quieted down everyone and advised the travelers to freshen up as there would be a big dinner celebration tonight. All the villagers, as well as the hunters, cheered in joy.

Night came and with it came the sounds of reveling and music. The music was not clear because of the people’s loud cheering voices. Desmond and Collin entered together into the dining hall (the biggest hut in the village was converted into the hall). Long tables were set in the room, chairs all around them, and the tables were filled with so much food that even an extra pin couldn’t fit onto them. Both of them were greeted with great aplomb and cheers. Aurel sat at a separate table specially put out for him and he motioned Desmond to sit next to him. Desmond and Collin went and sat in front of the leader. Merriment was all around the travelers this night. Because they had to travel every day and get up early every morning, Desmond did not let his team drink at all, but tonight booze was everywhere and he thought to let this one time go. He himself didn’t drink at all. Desmond did not like his personality when he got drunk. He always liked to stay alert, all his senses in control and so did Collin. The dinner went on pretty much uneventfully. Aurel kept congratulating them on their victory and so did all the other people. The villagers kept coming to their table to offer food to Desmond and Collin, which they couldn’t refuse. By the time dinner finished, both of them felt like they could give birth there and then. But several questions were bugging Desmond all this while. 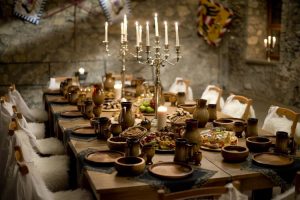 Why had the monster attacked Poshya specifically? How does king Alder come into play in all of this(the monster had mentioned him)? Was there something he was missing here? Why have these people made the settlement in the middle of the woods instead of going to the city or village nearby? One piece to this puzzle was missing.

The writer of the story “An Adventurous Story: Treasure Hunter For Hire, Chapter VII” is Gitanjali Mishra. Connect with her on Facebook.