The treasure was really close now. They had followed the map obediently, which was given to them by Orvil, except for a slight detour when they met the ill-fated tribals. The main treasure was on an island that they had heard of previously but had never seen it in person. Not even one of them had been on an island or traveled in a boat so it was to be a major difficulty for them. The island was called The Bleak Ait. It had a huge mountain peak and evidently, the treasure was in its dead center. In order to reach to the ait, they had to first board a boat from the docks that were situated by the banks of the river Red Run. Red Run was famed because it changed its color at dusk to a deep blood-red. The folks thought it to be a blessing from God itself and considered it very pious.

The journey up until then had been pretty straightforward. Soon after the fight with the tribals, they escaped the twists and turns of the forest. They stopped not more than twice in cities which came their way. Desmond was still being disregarded despite him making serious efforts towards the team. He was repeatedly snubbed by the fellow teammates even by Collin. Speaking of whom, he had gained the hunters’ trust very rapidly. It took him not more than half the time it took Desmond and he had fought a water monster for the hunters to even acknowledge him. At nights during the campfires, the whole team sat together listening intently to Collin’s childhood stories not even inviting Desmond to chat or eat with them. It hurt him so much to see all this. It made him question his own abilities as a leader. What he didn’t know was that the cause of his suffering was none other than his best friend Collin. Since Desmond’s attack on Alvy, who incidentally was on the road to speedy recovery, Collin had been instigating the team against Desmond infusing their minds with false stories of their childhood portraying the former leader as a very evil and bad man. Because everyone trusted Collin, they believed in his stories and lies too. Slowly but surely, all of them developed a deep hatred toward Desmond. They thought that he hit Alvy on purpose and wanted to kill all of them after looting the treasure for himself, thanks to Collin.

On the other hand, Desmond’s powers were slowly getting out of his control. Although he had decided to start training to control his powers, the anger and worry made it all the more difficult. Nonetheless, they came to the point in the journey, where the wagons would prove useless, and the boats had to be hired. When they arrived at the docks it was Desmond’s responsibility to talk to one of the captains to see if they could hire them but Collin jumped ahead and took the part instead. It broke his heart even further, so instead of hanging around the team like an anchor, he decided to take a little tour of the place, him being here for the first time. 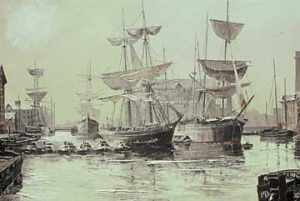 It was a very busy place. People were selling all sorts of things in the little shops they had set up. Some, who were not so lucky with the shops, were selling cigars and snacks on a little tray hanging by their necks. All types of people were present there. You could see the rich getting off from their wagons and looking for their ship, several porters dragging their luggage behind them; you could even see the poor with their teeny-tiny worldly possessions, looking for a small boat that they could afford to take them to a new place so they could start their lives anew. However, the place smelled nasty. The fish smell was intense and the wind that blew from the river didn’t help it at all. Several fifteen feet long, rectangular wooden structures protruded from the bank where the boats were anchored. There were several types of boats. Some were big, while some were pretty small. They ranged in colors but were mostly white. People were constantly looking after them, some were repairing them, some were loading them with cargo, and some were loading them for travel.

Desmond had spent so much time site-seeing that he had totally forgotten about his team. He rushed to the place where he had last seen them. When he reached the spot he couldn’t comprehend the site that met his eye. Two medium-sized boats, filled with people who awfully resembled the hunters was helming away from the docks in the general direction of the treasure island. If up until then Desmond’s heart, acting as a shield, had somehow endured the blows, the pain that this one inflicted shattered it completely. They left him behind. He found a corner and sat there with his head between his knees, melancholy. People who went by looked at him, boat captains came up to him to ask if he wanted to go anywhere, but he answered to none. Defeated, he thought of retreating to Esterdell. At least he would be able to see Elaine, the love of his life, again. Slowly he stood and rummaged in his pockets for money with which to hitchhike a ride when he felt something in his breast pocket. On pulling it out he found the treasure map he had copied himself from the original one. When Collin usurped the throne of leadership, he took the ownership of the map too, so one night Desmond had to steal it and copy it for himself. His map was as precise as the original one. Seeing the map suddenly a plan formulated in his brain. Instead of going home in defeat he would show these arrogant bastards what he was made of. He rummaged his pockets further to check whether he had all the resources he needed to accomplish this. He would prove it to them that he is the true treasure hunter. He would make them regret leaving him behind and disrespecting him all this time. This is his only opportunity.

The writer of the story “An Adventurous Story: Treasure Hunter For Hire, Chapter XVI” is Gitanjali Mishra. Connect with her on Facebook. 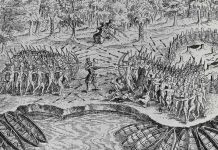