The next morning, the team of hunters woke up feeling fresh and relaxed. The hut that had been converted into the dining hall last night, was made into the breakfast hall this morning. As everyone was moving into the hall, Collin reached from behind and grabbed Desmond’s elbow. Desmond whirled suddenly and saw Collin face to face with him. Collin seemed on edge and a tad-bit worried.

“Do you want to say something, my friend?”, asked Desmond.

“Yes. Could you come to the side for a minute?”, said Collin in a hushed voice and pulled Desmond in a far, desolated corner of the woods.

“I want to know what happened last night. Why was Aurel so worried? And what did he give you? I saw a faint green light glowing from your pocket when you came in, to sleep last night.”

Desmond told him everything, from start till the end. He took the tiny stone from his pocket with care and showed it to Collin. This time also when he touched the stone, he felt a jolt of energy run through his body like lightning. He felt goosebumps on his skin and was almost successful in hiding a visible shiver. Collin eyed that stone with heightening curiosity. He began to touch it with his index finger but Desmond prevented it.

Collin retracted his hand without saying anything. “So, does it have any special powers? What’s its story?”

“I don’t know. I have told you everything that Aurel told me. I don’t think even he knows the history of this stone or why it was in the care of Poshya’s head priest.”

“I don’t feel anything different, Collin. It is just a normal stone as far as I know. I don’t think it would give any superpower to anyone.”

Since they have become friends, Desmond shared everything with his best friend. He has left no detail from Collin ever, except for this. He himself did not know why he didn’t tell Collin the electricity that tingled through his body. He didn’t even realize that he had lied until he did so.

“Okay, let’s leave it for now. Let us go and eat something, I’m starving.”

And so they left for breakfast. After the team had needed themselves full of the villagers’ rations, they packed their belongings back into the wagons and prepared to be on their journey again. Desmond was saying his final goodbyes to the villagers when Aurel took his hands in his and shook them violently. With tears in the old man’s eyes, he said, “You don’t know young man what a boon you and your men have been for us. I cannot stress this enough. Thank you. Thank you for everything.”

Desmond didn’t know how to respond to this, so he just hugged Aurel. And so, they were back on their adventure. 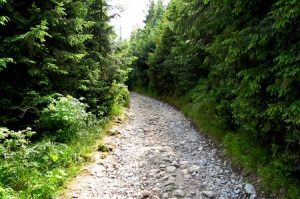 The next week was spent facing the difficulties that come with traveling. One time one of the wagons broke down, another time there was not enough wood to build a bonfire. One time the rain pelted down so hard that the shelters they had built to evade it blew away in the wind leaving them wet and shivering, in the woods. The roads were also not smooth and easy always. They had to pass through the rocky roads of the forests, the wobbling and crumbling bridges of the brooks, the danger of the animals that might attack in the night, and sometimes there were even no roads or bridges to travel on. They were truly the roads less traveled by. Desmond still did not dare keep the stone around his neck, so he kept it in his pocket.

One such night in the woods, it was really late and Desmond stood on the watch tonight. Everyone else was fast asleep. As was his habit, Desmond took out the stone and kept swirling it in his fingers. The faint green light from the stone turned his fingers green but was not so bright so as to attract any attention. His mind wandered to the image that Aurel had created in his mind of the day the monsters had erased Poshya’s existence. Every time he touched the green thing, a vivid image of that cursed day, always flashed in his mind. This time was no different. Breaking Desmond’s reverie came to a voice calling out his name. Turning back, he saw his best friend smiling at him.

“Are you not going to sleep? You must be tired.”, said Collin. Desmond turned his head away from Collin and said, “No.”

“Are you thinking about the stone?”

“Yes! I am not able to figure out what this stone’s purpose is?”

“Don’t worry. Time will reveal all. Now go to sleep.”

“No. Stop looking out for me as if I’m your child.”

“No Collin. You don’t have to look out for me. I am not a small boy. I can take care of myself.”

“What are you getting so worked up over, huh? I’m just saying that it is my turn to keep watch now so you can go and sleep.” 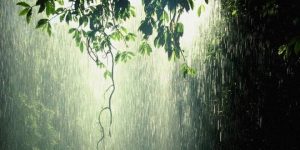 Many nights like these came and went. Over that time, Desmond became more and more irritated. He didn’t realize it but it was because of the stone. Keeping it on your own self can harm one’s cognitive abilities. None of them knew that, not even Aurel. Everyone thought Desmond’s changed nature was because of the hardships they had to go through. There was incessant rain, the food rations were dwindling rapidly and some of it has already been destroyed by the merciless monsoon. They had to sleep in the open every night with nothing or very less to cover themselves with. Soon they will have to find a city or a village or else they might starve to death.

The writer of the story “An Adventurous Story: Treasure Hunter For Hire, Chapter XI” is Gitanjali Mishra. Connect with her on Facebook.