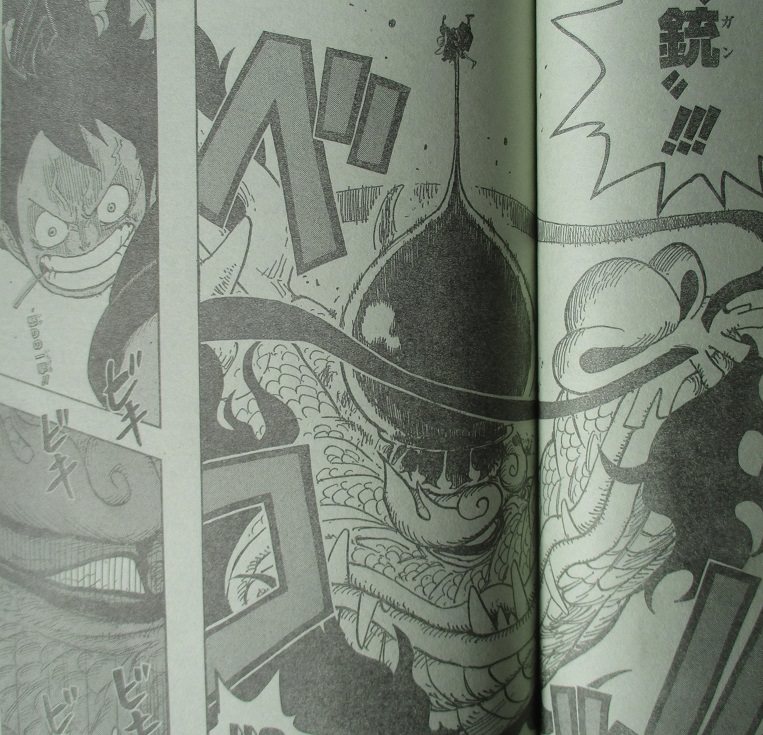 In OP chapter 922, Momonosuke becomes distressed at seeing Kaido’s dragon form. Law reports to Kinemon that they have figured out his, Luffy’s, and Zoro’s true identities. On top of that, Kaido’s target is the ones who interrupted his Smile dealings, Luffy and himself, which is not a hindrance to Kinemon’s strategy.

As concerned about Kaido appearing in the skies above Okobore Town, Luffy heads off on his own towards the town. Law is angry that the plan will be ruined if Luffy makes a move due to his emotions and chases after him. Kinemon and O-Kiku also head down the mountain in order to rescue O-Tsuru in One Piece Chapter 922.

In Bakura Town, the townsfolk and bandits have created a commotion during their attempt to run away from Kaido.

Kaido remembers Shuntenmaru, Also, Shutenmaru’s recalls a time when he fought a dragon. For whatever reason, Kaido is drunk and cheerfully states to Shutenmaru, “If you become my subordinate, I’ll forget about the past.”

Jack is troubled that it will be a huge crisis if drunk Kaido rampages as the citizens of Okobore town are the labor force for the factories. Hawkins displays quick wit and relays to Kaido that Luffy and Law are present at Oden Castle. perhaps an influence of the legends, there has been a rumor spreading amongst the people about suspicious light emanating from Oden Castle.

“If that structure is also fanning the flames of Shogun Orochi’s fears, then perhaps destroying that empty castle would be killing two birds with one stone,” Hawkins explains to Jack the reason why he directed Kaido towards Oden Castle.

Nami and the others are desperately preparing for their escape as Kaido has suddenly headed their direction. Kaido opens his gigantic mouth.

The ruins are blown away with one strike of Kaido’s breath. While even Jack and Hawkins are stunned by Kaido’s overwhelming power, the silhouette of a person appears right above Kaido.

Having witnessed his friends being hurt right in front of him, Luffy hammers into Kaido an attack of anger.